The Museum Socitey Škofja Loka as part of its mission issues and participates in publishing literature associated with the former territory of Loka’s dominion.

At the 1000th anniversary of the first mention of Škofja Loka (1973) a book with inestimable value for researchers of Škofja Loka and its past was published – Škofja Loka in Loško gospostvo, by Pavel Blaznik.. This monumental work is certainly the most complete model and it perfectly describes regional, primarily agrarian history of Slovenia. It is an indispensable cornerstone of local history for Škofja Loka. The book is available online.

In the same year France Planina’s monography was published – Škofja Loka s Poljansko in Selško dolino. It is a book already having its third edition, providing natural, historical, economic and cultural characteristics of Škofja Loka and its surrounding areas. The book is available online.

In 1997 an exhibition Zamorc s krono by Peter Hawlina took place and a catalogue carrying the same name was prepared. It is a “brand” which used to unite the central part of Europe more than today the golden stars of European Union do. It is of original content and design.

In the same year, at 60th anniversary of the Association a booklet Profesorski ceh in Muzejsko društvo v Škofji Loki was published by library Knjižnica Ivana Tavčarja Škofja Loka. It brings lots of useful information about founding members and their publishing activities.

Bibliography of professor France Planina, as well prepared and published by Knjižnica Ivana Tavčarja in 2001, is a rich and detailed life and work overview of one of the cofounding and honorary members of the MSŠL.

In year 2008 when The Museum Association Škofja Loka was celebrating its 70th anniversary, photo-monography Pisana Loka Škofja Loka by France Stele was published. It presents a contemporary, excellent large-format photo-monograph of a city with a rich cultural heritage. 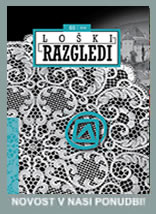